So I have gotten a ton of emails and tweets about how to make an accapella.    I know there is software you can buy that promises to remove vocals or make accapellas.  There are also a bunch of tutorials out there too.

Now I am not the expert. I don’t make karaoke tracks but I do love to make my own remixes.  So I figured I would share the method I typically use.

This method requires the following:

I definitely recommend using wave files instead of mp3 files.  Mp3s are often too compressed which causes this method to be less reliable.  Instrumentals are usually available for DJs and as extra tracks on CD singles.  You may have to dig  a bit to find rare tracks.  You may also have some challenges depending on the studio methods of  ‘exporting’ the final mixes. Differences in effects and compression can sometimes throw this method off as well.

With that being said, pick your song and get your instrumental.

For the muli-track editor I use Cubase 4. I haven’t upgraded to Cubase 5 only because I have 2 licenses (1 in the studio and 1 for my home) and i don’t fell like having them out of sync.  I know, I could carry the dongle back and forth but let’s face it….I’m absent-minded and would probably lose it.

You can use other applications.  Sonar, Logic, Vegas, ProTools, Record, to name a few.  Basically any app that allows you to zoom in and line up multiple stereo audio tracks.  For the sake of this article, I’m using Cubase4.

So let’s get going.

First thing to do is start a new project.  You can put the project anywhere depending on your working preferences.

One note, I usually set up the project in the same bit rate and frequency as the ORIGINAL wave, usually 44.1kHz, 16bit for this work.

Add 2 tracks to the project. 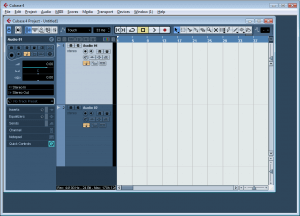 Next, insert the tracks into the project, putting each file (main & instrumental) on their own track.  You’ll notice that the tracks aren’t always the same length and don’t have the same leader. 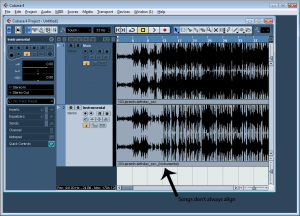 Now, choose a section of the song that has a distinguishable peak/valley.  You may need to zoom both horizontally and vertically.  As you zoom, you’ll be able to see how far off the two tracks really are from each other. 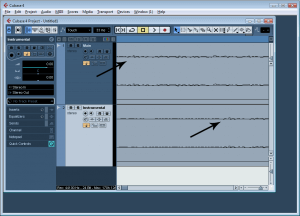 Line ’em up!  This can be the hardest part of the effort.  You will have to keep sight of the matching peaks and align them.  Remember, if you inserted them both at the beginning of the project, you won’t be able to drag the ‘later’ peak to the left.  Instead move the ‘earlier’ track later. 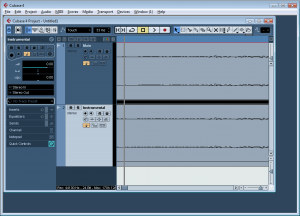 Get them lined up

Once you have everything lined up, zoom back out and spot check the song to ensure the big kick drums and peaks are aligned throughout the song. 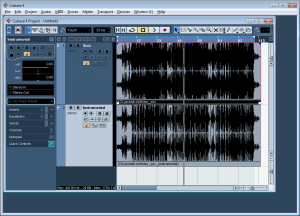 Now zoom back in to a major peak and notice the loud points are aligned.  Stay at this view for the next section. 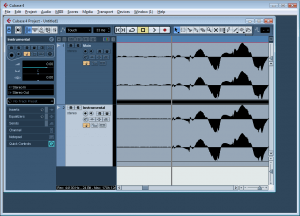 Now that everything is aligned, it’s time to do the magic.  This process is based on the theory that the instrumental contains all the same frequencies as the main version except the vocals.  We’re going to flip the phase of one of the tracks. Depending on the software, it will be labeled differently.  In Cubase, we are going to do a ‘phase reverse’ on the instrumental track. 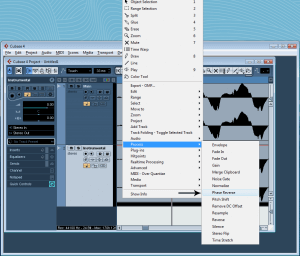 When prompted, make sure you are affecting both channels.

So the result is a phase reversed version of the instrumental track aligned with the main track.  The peaks are exactly opposite causing the audio energy to be exactly opposite.  This causes everything that exists in both files to be silent.  EXCEPT THE VOCALS! 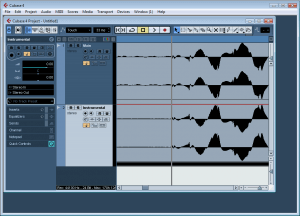 So this is where you can tell if it worked.  Most of the time this will give you a decent result.  Some situation just won’t work. You can try sliding one of the tracks ever so slightly one direction or another if there is still not enough isolation.  But if you are accurate on the first alignment, you won’t be able to get much better.

Set the in and out points and export.  Some situations call for a little bass rolled off.  I recommend that you do the eq on the main outputs instead of working with the individual tracks. 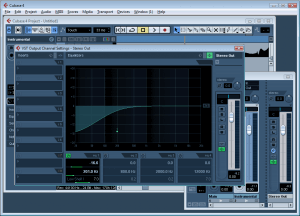 Roll off on the main

If the song you are trying to do doesn’t quite work, you may needto try another method or give up.  There are some good M-S methods if you aren’t able to find an instrumental.  There are also some acceptable effects that can isolate the vocals.  It will really depend on the application.  If you are making a remix, that has a lot of production, you may not need a high quality accapella.

One last thought. If you have too much “extra” noise in the accapella, you can gate or mute the spaces between phrases.  This helps clean up your output.

In this tutorial, I used the song “Birthday Sex” by Jeremih.  I did this work when the song first came out.  I made a remix that I’ll be making public shortly.  Now go out and make some cool mixes and be sure to leave a comment if this was helpful.

This site uses Akismet to reduce spam. Learn how your comment data is processed.