So, if you are not living under a rock, you saw the the ignorance of Kanye West at it’s finest tonight on the MTV VMAs. He is apparently so desperate for attention that he rudely interrupted Taylor Swift’s Moon Man moment to tell the world how great Beyonce’s video was. 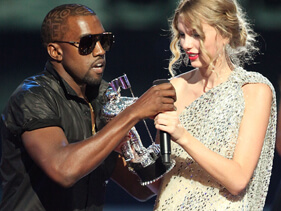 Now, he clearly feels like he is the spokesman for all of America (sarcasm). And maybe it’s the Hennessy talking….let’s hope so….. otherwise, he is a selfish, desperate, attention-hungry tool. (I’m still guessing the latter). While I agree Beyonce’s video was good and it won the honors it deserved, I’m not sure where Kanye’s bloated sense of representation of ‘the real world’ came from.

By the way, Beyonce, you are very classy. Your performance was great and you did a wonderful thing giving Taylor the moment Kanye stole! Hat’s off to you, girl….

My advice to Kayne’s doctor: Find an excuse to wire Kanye’s mouth shut again… Seems he’s too detached from reality and he needs some manners….

Kanye, you would have gotten a chance to speak when you accepted your award….. oh… wait… you didn’t get one. I’d still give you the award for the most idiotic show of ignorance…. 🙂

And, if you are going to apologize… do it right. Your condescending, arrogance and lack of sincerity annoys me to no end. I just hope your start making some hits again so you don’t have to appear so desperate. Man, you really aren’t helping your situation.  I don’t think Michael Jackson would have been proud of that fiasco… Nice way to disrespect him too…

On a lighter note… Sorta…. This is funny…

All right reserved to SITE NAME | Designed by Your Name